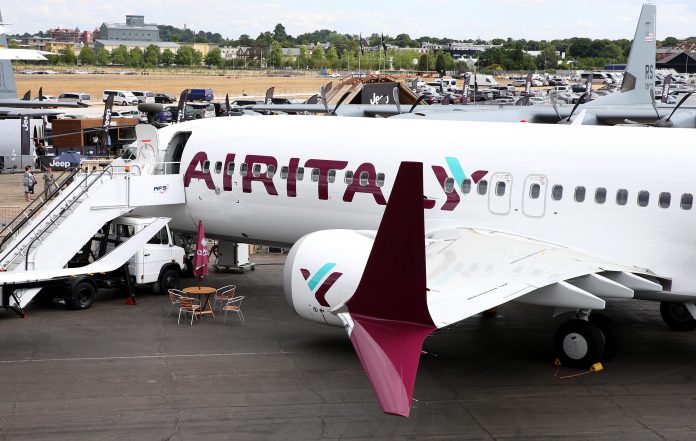 Air Italy showcased its brand-new Boeing 737 MAX 8 aircraft in the airline’s new livery for the first time at Farnborough International Airshow 2018. The aircraft was delivered to the airline just last week and flew straight to the airshow for spectators to tour and experience first-hand.

This is the second of 20 brand-new Boeing B737 MAX 8 aircraft that will join Air Italy’s growing fleet over the next three years and the first of approximately 50 new aircraft to be added to the Air Italy fleet by 2022. The first Boeing B737 MAX 8 aircraft was delivered earlier this year in Seattle and flown to Milan for its inaugural flight. The state-of-the-art aircraft features modern and spacious cabins, superior operating economics and a greater fuel efficiency.

Qatar Airways strengthened its commitment to Italy in 2017 with the acquisition of 49 percent of AQA Holding, the new parent company of Air Italy, while the previous sole shareholder Alisarda kept 51 percent. This acquisition marks a new era in Italian aviation for the people of Italy and for passengers worldwide.

Qatar Airways Group Chief Executive, His Excellency Mr. Akbar Al Baker, said: “Displaying Air Italy’s Boeing 737 MAX 8 aircraft in the airline’s new livery at Farnborough International Airshow 2018 has put Air Italy on the center stage, and showcased this state-of-the-art aircraft to an international audience. We are delighted to be supporting Air Italy as they embark on this exciting journey toward becoming Italy’s leading carrier.”

Mr. Sultan Ali Allana of Alisarda and AKFED said: “Our first experience at Farnborough International Airshow as Air Italy has been a great achievement. By showcasing our newest and most advanced aircraft in new livery, the Boeing 737 MAX 8, we have been able to present our latest product to an international audience, one that has already proven to be a great success in the Italian market. We look forward to continuing to work closely with Qatar Airways to develop Air Italy into a world-class airline.”

Qatar Airways displayed six of its most advanced aircraft at the Farnborough International Airshow this week, including the Airbus A350-1000 and the Boeing 777-300ER, both of which feature the airline’s award-winning Business Class seat, Qsuite. The airline also displayed for the first time its Boeing 747-8 Cargo Freighter, Qatar Executive’s Gulfstream G500 jet and the JetSuiteX Embraer 135 jet.