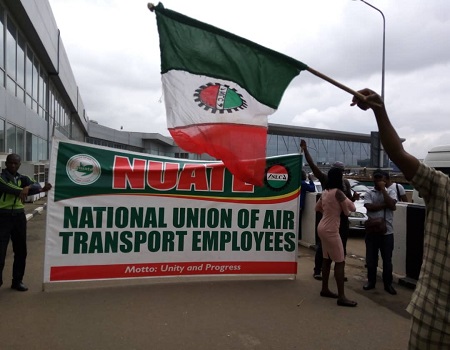 The National Union of Air Transport Employees (NUATE), a key aviation union of Nigeria, has called on the Honourable Minister of Aviation, Senator Hadi Sirika, to urgently review his aviation roadmap.

According to the union, the call for the review of the roadmap is in order for the projects to be harmonised with the national interest and the current realities in the world of aviation.

The National President, National Union of Air Transport Employees, Comrase Ben Nnabue, who made this call on Sunday, during his May Day speech, also called on the Federal Government to urgently address the shortcomings of the newly commissioned international terminal at the Murtala Muhammed International Airport (MMIA), so as to put the terminal to use. Nnabue warned that it will be a major disservice of this administration, should the terminal turn out to be a white elephant.

He said: “This must be avoided at all cost. As this is the season of national politicking, I want to urge all workers not to slack or be complacent. To do so will attract a heavy price of allowing those with less stake enthrone governments at all levels which may be anti-workers. For this reason, I seriously charge you all to take advantage of ongoing voters’ registration to ensure each of you is armed with your voters’ card, ready to perform your civic responsibility of voting at all the forthcoming elections.”

The union equally expressed its displeasure concerning the current discussions around the federal government’s plans to concession four major airports across the country. According to Nnabue, “we are unclear as to the government’s actual response to the demands of aviation unions on labour issues and many lapses in the concession program. In the coming weeks, important decisions will be made to chart a clear path towards ameliorating already stated demands of workers.

In like manner, we express our frustration at the dilly-dallying attitude of the BPE in attending to the negotiated redundancy benefits of ex-staff of SAHCO, a matter pending since 2009. Let me assure the affected ex-workers that the unions have gone so far and cannot retreat on the matter at this point. We are at the verge of final solution, failing which we shall take decisive actions towards seeking justice for the victims.”

The association’s President stated that the union condemns the back catering being perpetrated by foreign airlines operating in the country, adding that the union is committed to seeing an end to the unwelcomed act in the interest of local in-flight catering services companies.

Announcing the possibility of an industrial action, Nnabue said, “I use this opportunity to charge all aviation workers to prepare for a mother strike action against Caverton Helicopters at a date to be shortly announced.”

Another issue raised by the NUATE leadership, during the event, include, what the sector witnessed before it could get relief from the waning notorious Coronavirus, only to be  “greeted with the double punch of the Putin war on Ukraine and skyrocketing aviation fuel price”. All these, coupled with the travelers’ negative reactions to recent air fare increases, were reasons given for the  industry’s delay in exit from recession.

Nnabue also addressed the twin big issues of Minimum Wage Consequential Adjustment and Conditions of Service for the aviation agencies. In his words, “we stand firmly by the decision of workers not to accept continuing shifting of the goal post by government agencies on these issues. Therefore, this week has been set out for major decisions and subsequent decisive actions that will bring these issues to a foreclosure.”