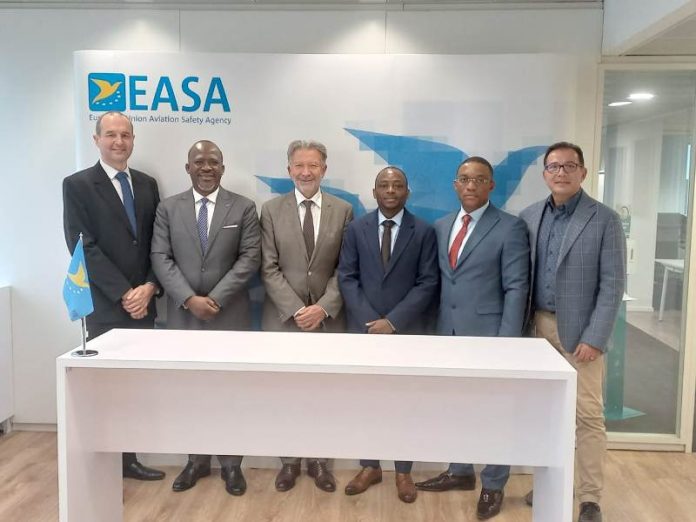 This was made known at the ENCASIA Plenary holding 11-12 Oct 2022 at the Belgian Safety Investigation Authority, Federal Public Service Mobility and Transport, Brussels, Belgium where a BAGAIA delegation led by the BAGAIA Commissioner, Engineer Charles Irikefe Erhueh, in company of Engr. Akin Olateru AIB-Nigeria Commissioner, and Mr. Prempeh Akwasi Agyeibi-Commissioner AAIB-Ghana all under observer status.

According to EASA Senior International Cooperation Officer Sub-Sahara Africa Regional Coordinator, Yves Koning who responded to the special requests by BAGAIA delegation, said consultations with ICAO on the modalities to implement ECCAIRS in other regions outside Europe is ongoing.

Mr. Koning appreciating the requests especially that of the ECCAIRS said, “Yes it already being implemented in the Europe, but they are finalizing with ICAO on the modalities to implement it outside Europe. Once that is done it will now be extended on train the trainer.

ECCAIRS is a cooperative network of civil aviation authorities and safety investigation authorities in Europe, a project being managed by the Joint Research Centre of the European Commission (DG JRC) on request of the Directorate General for Mobility and Transport (DG MOVE) and in close co-operation with the European Aviation Safety Agency (EASA).

The ECCAIRS mission is to aid national and European transport entities in the collection, sharing and analysis of safety information in order to improve public transport safety. However, ENCASIA currently has 27 member states.

BAGAIA under the EU-ASA project, presented the request for peer reviews of processes in the regions where EU experts will do due diligence and provide reports afterwards.

Also BAGAIA requested for human capacity development and the ECCAIRS training of the new version.
The benefits of ECCAIRS is to compliment internal reporting system for the exchanges of safety data i.e. collecting, sharing and allowing analysis of Safety Data that enhances Aviation Safety.