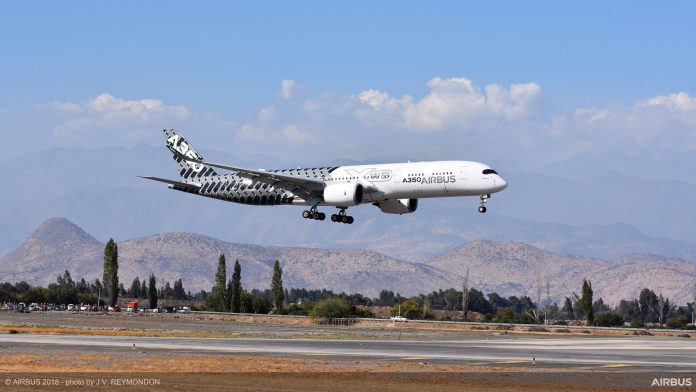 The A350-900 flight test aircraft arrived at Santiago Chile’s Arturo Merino Benitez Airport for the 20th edition of the FIDAE air show, where it will be on static display and take part in flying demonstrations between 2-5 April.

The A350-900 displayed in Santiago, MSN002, first made its debut at FIDAE in 2016. MSN002 is one of the five original development test aircraft, fitted with a two-class cabin with 42 lie-flat, business-class seats in a four-abreast configuration and 210 economy-class seats in a nine-abreast configuration. This aircraft was used for testing all cabin-related systems, which have demonstrated a high level of maturity since the A350-900’s entry into service in 2015.

The A350-900 is a member of the A350 XWB Family, an all-new family of mid-size widebody long-haul airliners shaping the future of air travel. Since its launch, Airbus has captured nearly 50 percent market share of net orders of widebody aircraft in Latin America.

In 2016, LATAM Airlines Group became the first operator in the Americas to fly the A350 XWB when it started operating its first of 27 on order. Other A350 XWB customers in the region include Synergy Aerospace, Avianca’s main shareholder and owner of Avianca Brasil, which has ordered 10 A350 XWB.

The A350 XWB features the latest aerodynamic design, carbon fibre fuselage and wings, plus new fuel-efficient Rolls-Royce engines. Together, these latest technologies translate into unrivalled levels of operational efficiency, with a 25 percent reduction in fuel burn and emissions, and significantly lower maintenance costs. More than 26 million passengers have already enjoyed the absolute comfort of the A350 XWB Airspace cabin which, on top of the aircraft’s spaciousness and quietness, provides better ambience, design and services.