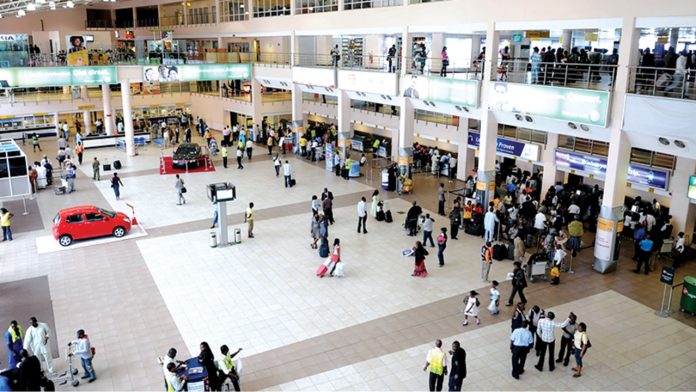 The National Bureau of Statistics (NBS) says 3.65 million air passengers travelled through Nigerian airports in the second quarter of 2018 as against 3.84 million recorded in the first quarter.

The NBS disclosed this in its “Air Transport Data” (Q1 and Q2 2018) report posted on its website.

The bureau said the figure declined by 33.51 per cent year-on-year.

The report said there was a consequent 4.9 per cent decline in passengers for the second quarter when compared to the preceding quarter.

The report said the total aircraft traffic declined year-on-year for both the first quarter (1.48 per cent) and second quarter (10.17 per cent) when compared to the corresponding quarter in 2017.

“In the first half of 2018, aircraft traffic totaled 96,659, a 5.9 per cent decline from total aircraft recorded in the same period last year,’’ it stated.

The bureau said there was a significant year-on-year decline in air cargo traffic via Lagos for both the first quarter (49.8 per cent) and second quarter (65.4 per cent).

This, the NBS said, led to an overall year-on-year decline of 37.8 per cent for the first half of the year.

It said that a growth of 25.6 per cent was, however, recorded between the second quarter and the preceding quarter.

According to the bureau, a 34.2 per cent increase in total mail traffic was recorded in the first half of the year when compared to the same period in 2017.