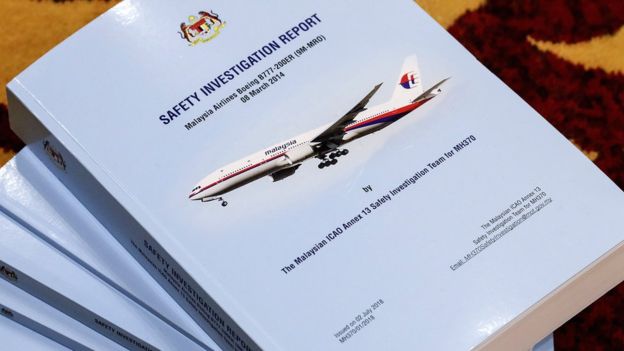 One of the greatest aviation mysteries of all time deepened on Monday when the official government inquiry into the disappearance of Malaysia Airlines Flight 370 released a 495-page report that gave no definitive answers as to the fate of the airliner.

The plane was heading north from Kuala Lumpur, Malaysia, to Beijing on March 8, 2014, when it deviated from its scheduled path, turning west across the Malay Peninsula. It is believed to have turned south after radar contact was lost and crashed somewhere in the southern Indian Ocean after running out of fuel.

No significant pieces of the wreckage of the jetliner, a Boeing 777, have ever been found. Nor have any remains of the 239 people on board.

The absence of definitive answers in the report, which was released at a news conference, devastated families of the victims, who have waited more than four years for the searches and investigations to be concluded.

Intan Maizura Othaman, whose husband, Mohd Hazrin Mohamed Hasnan, was a steward on the flight, told reporters after a briefing for family members that she was angered by the absence of answers.

“It is so frustrating, as nobody during the briefing can answer our questions,” Bernama, the Malaysian state news agency, quoted her as saying.

The long-awaited report offered no conclusion on what caused the plane with 239 people aboard to veer off course, cease radio communications and vanish.

The head of the safety investigation team, Kok Soo Chon, said the available evidence — including the plane’s deviation from its flight course, which tests showed was done manually rather than by autopilot, and the switching off of a transponder — “irresistibly point” to “unlawful interference,” which could mean that the plane was hijacked.

But he added that the panel found no indication of who might have interfered or why, and that any criminal inquiry would be the responsibility of law enforcement authorities, not safety investigators.

While Mr. Kok did not directly address theories that the disappearance was the result of pilot suicide, he said investigators were “not of the opinion that it could have been an event committed by the pilot.”

Background checks on the passengers by local law enforcement agencies also revealed “a clean bill of health for everybody,” he added.

The disappearance of Flight 370 led to numerous conspiracy theories. And the report, by offering no final conclusion, will do little to settle the matter.

But the investigators did dampen some of the most provocative theories. The possibility that a member of the flight crew intentionally downed the plane, as with Germanwings Flight 9525, which investigators say the co-pilot intentionally crashed in 2015, has been pushed by some experts.

The report detailed an extensive examination of the pilot, Zaharie Ahmad Shah, and the first officer, Fariq Abdul Hamid, including their financial status, health, tone of voice on radio communications and even their gait as they walked to work on the day the plane disappeared. The investigators “could not detect any abnormality,” Mr. Kok said.

Investigators also considered data saved on a flight simulator at Mr. Zaharie’s home, which showed seven coordinates that would create a flight path from Kuala Lumpur to the southern Indian Ocean. The manner in which those points were saved made it impossible to draw any conclusions, Mr. Kok said.

A police investigation “concluded that there were no unusual activities other than game-related flight simulations,” the report said.

While Mr. Kok suggested the possibility of “unlawful interference by a third party,” investigators could not establish that anyone except the pilot had flown the plane.

Mr. Kok said there had been no threats or credible claims of responsibility for the plane’s disappearance, which might have been expected as part of a plan to take it down intentionally.

Technology that would allow someone to pilot the aircraft remotely had not been installed on this plane, the report said. No mechanical issues that would affect the plane’s airworthiness were identified either.

Other possible factors — like lithium-ion batteries that could have caught fire and the presence of mangosteen fruit in the plane’s cargo, which was considered unusual — were considered. But such materials had been carried dozens of times before on the same route without incident, the report said.

The panel said it would disband, but declined to call the report final.

“It is too presumptuous of us to say this is the final report,” said Mr. Kok, a former director general of Malaysia’s Civil Aviation Department. “No wreckage has been found. The victims have not been found. How could this be final?”

Families of the 239 people who disappeared with the plane had expected clearer answers in the report, and were left disappointed.

“1,605 days of roller coaster, families still have no closure with the release of the latest 495 pages safety investigation report,” Voice370, a group of family members, said on its Facebook page. “The team concluded that they were unable to determine the real cause for the disappearance of #mh370. Simply unacceptable as a ‘final’ report. How can we prevent another MH370 incident in future?”

Most of the passengers were from China, followed by Malaysian citizens.

After the aircraft disappeared, an air search of nearly two months was carried out, followed by an underwater search, primarily by private contractors.

Investigators tried to determine where the plane went down by overlapping its fuel estimates with a 400-mile arc along which its final satellite communication was made. Ships scoured a zone of more than 46,000 square miles before calling off an official search last year that cost a total of $150 million.

Another search carried out by an American company with support from the Malaysian government ended in May after covering an additional 43,000 square miles, also without finding the plane.

The Malaysian safety investigators said on Monday that they had waited to release their report until after the search was concluded.

A small amount of debris from the plane has been found, including what was thought to be a part of its wing, discovered on the French island of Réunion, east of Madagascar, in 2015. An American lawyer found another piece, a gray triangle of fiberglass composite and aluminum with the words “No Step” stenciled on one side, in Mozambique in February 2016.

The discovery of those objects supports the theory that the plane broke apart upon entering the southern Indian Ocean, and that pieces that stayed afloat then traveled west on currents that run from Australia to Africa.

The investigators said on Monday that they had found several shortcomings in procedure among various bodies responsible for the flight’s safety.